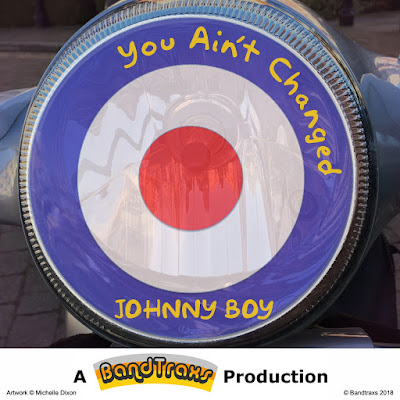 Listen here on Spotify
Bandtraxs are delighted to release this new original work co written by UK blue-eyed soul performer Johnny Boy Pryers and established UK songwriter Carl Dixon called ‘You ain’t changed’. This collaboration has finally resulted in a truly authentic sounding blue-eyed soul masterpiece with elements of 60s Detroit soul and Carolina beach music. Carl and Johnny had communicated via email in 2007 with a view to someday working together musically and on meeting face to face at the 2015 Butlin's soul weekender, they decided to come up with an idea for a new song and this is the fruits of their labour. ‘You ain’t changed’ has bass, guitars and horns recorded in Nashville and drums from Detroit featuring Drew Schultz. Johnny's vocals were recorded in Rochdale at Lisa Stansfield’s 'Gracieland' studios. Hoping for a danceable number with loads of hooks, the song has had some excellent feedback from social media sites recognising just that.

“Born in Bolton, Johnny was destined for a life in music. Taking early influences from his parents, grandparents, aunts and uncles, Johnny was surrounded from a very early age by a wide variety of music from Northern Soul, Tamla Motown, Mod, Punk, Rock and Roll. Johnny first learned of his love for being on stage as a teenager when he and friends formed their first band ‘The Shakers’ in which he played bass guitar and helped out with the vocals. Over the years Johnny has performed alongside some very well respected artists such as Tommy Hunt, Dean Parrish, PP Arnold, La La Brookes, P.J. Proby, Marvin Ruffin, The Flirtations, Eddie Holman, Judy Street, Archie Bell, The Contours, The Velvelettes, Brenda Holloway, Prince Philip Mitchell, Kim Weston, Chris Clark, Martha Reeves and Diane Shaw.”

In the past Hull born Carl Dixon has co wrote and produced with celebrated Funk Brother guitarist, song writer and performer Dennis Coffey songs featuring Spyder Turner and Cherokee Pree in the ‘Motor City’ along with some other notable ‘Funk Brothers’ and session musicians back in 2008. 'Tell me (crying over you)' and 'Glory Fleeting' featuring Spyder Turner on lead vocals, 'Suddenly there's you' featuring Pree on lead and 'Detroit (city by the river)' by Bandtraxs were all released successfully from that session and are available to purchase or stream. Later that same year Carl teamed up with Philly legend Bobby Eli where they co wrote, along with singer songwriter Chiquita Green, four new songs in his ‘Grooveyard’ studio. The two releases from that session were ‘There I go falling in love again’ by Chiquita and ‘Soul Recession’ by legendary Salsoul recording harmony group ‘Double Exposure’ famous for such releases as ’My love is free’, ‘Ten percent’ and ‘Every man’. In addition, Carl also has a co write with UK soul singer Diane Shaw and producer Andy Birkinshaw called ‘Good Lovin Man’ which is on her album ‘Love, Life and Strings’. Carl and The Delgonives are also proud to have co produced and sang on Robert and Mike Paladino's 'Soul Girl' parts 1 & 2 in 2015. This song is a derivative of 'The Four Winds' original 'Playgirl' released in 1963. Carl and Robert created this masterpiece remotely via Internet collaboration.