'One piece of cake' by The Delgonives

‘One piece of cake’

The official release date is the 1st September 2017 and the track can be purchased from
Amazon, iTunes and all leading download and streaming services. 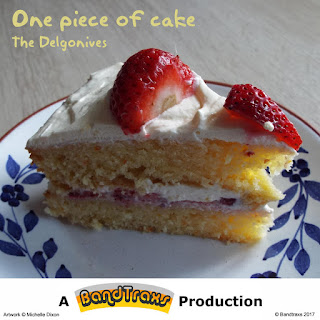 Following on from the 2017 release of 'Tell me (crying over you)', The Delgonives perform this exciting new song, again with a familiar 1960s groove. Carl Dixon wrote the song with a retro melody that takes the clock back to around 1966 and this production gives it a ‘Carolina Beach’ sound with sprinklings of Detroit and the 'Wall of Sound' here and there. This is the tenth 'Delgonives' release in the last few years and has a number versions that are available to download, including the solo saxophone, organ and vibraphone mixes. My guitarist offered a sitar effect track which I thought was quite novel, so track 8 features that idea. All vocals were recorded in London/England, but the guitars, bass and horns were recorded in Nashville and drums by Drew Schultz in Detroit. The notion of multiple mixes is to give listeners, radio stations and potentially TV stations a choice of recordings that fit their programming. This initiative also exploits the technology that allows experimentation to another level with master recordings.