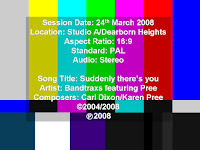 'Bandtraxs' is the generic name for Carl Dixon's' musical initative featuring some great musicians from Detroit and Philadelphia. This personal project has developed over the last two years and so far, four songs in each city have been recorded. The name 'Bandtraxs' is appropriate because it was always about the musicians and how they interacted in the studio to create the band tracks with the producer/arranger at the time. It was legendary producer Dennis Coffey who first mentioned on the telephone to Carl, that he must make the band tracks for the songs with a rough guide vocal, so everybody could get a feel for the song prior to recording.
Details of the 'Bandtraxs' sessions are coming soon! Great soul music with a modern twist, from the US. The rhythm sections with only real instruments! Modern recording techniques of today accompany some traditional studio procedures to record new bespoke songs from Detroit and Philadelphia.

This short Detroit video clip showcases the wealth of talent employed to create some great new soul music. The songs are brand new so do not suffer the plight of the cover version!
at June 24, 2008 No comments: